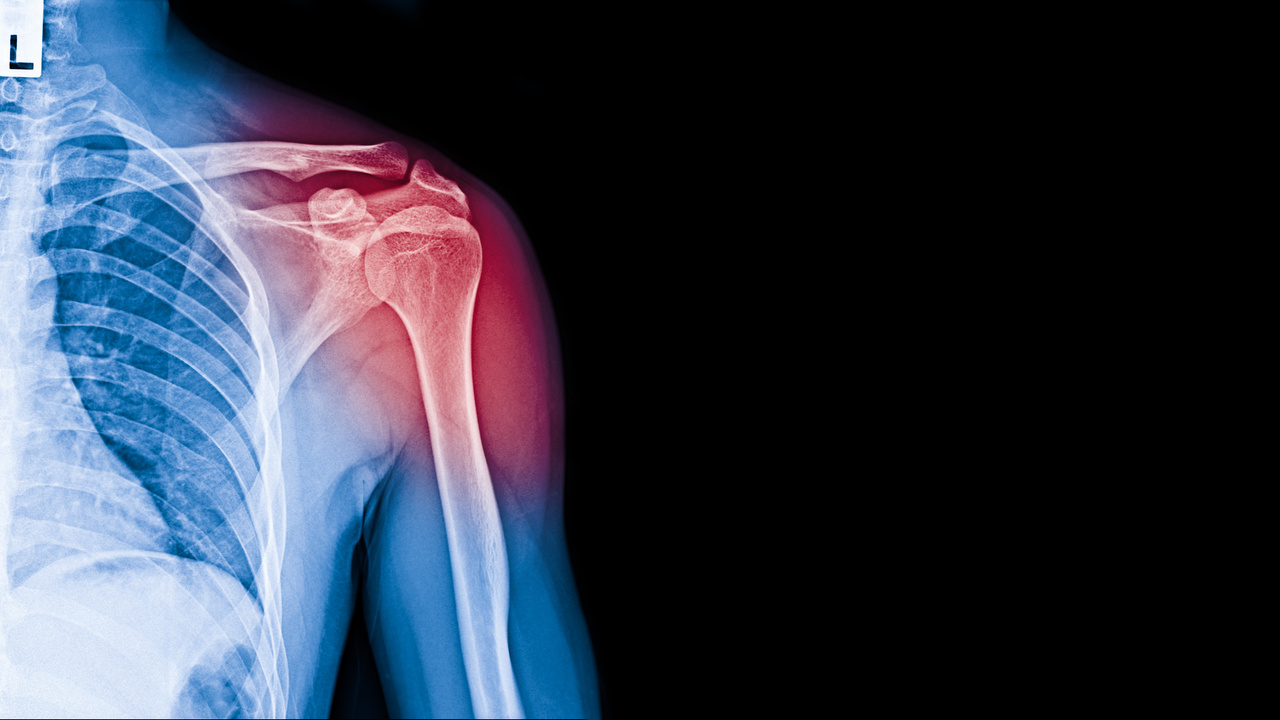 The risks of elective shoulder replacement surgery
In adults aged over 50, shoulder replacement surgery increased more than 5.6-fold, from 1,018 cases in 1998 to 5,691 in 2016. Despite this growth, no study has reported on the lifetime risk of further surgery, and serious events are considered rare. But a population-based cohort study in The BMJ shows that the risks associated with shoulder replacement surgery for arthritic conditions are higher than previously estimated. Using hospital episode statistics for NHS England, researchers looked at 58,054 elective shoulder replacements in 51,895 adults (aged ≥50 years). The lifetime risk of revision surgery ranged from 1 in 37 in women aged 85 years and older to 1 in 4 in men aged 55-59 years. The risks of revision were highest during the first five years after surgery. The risk of any serious adverse event at 30 days post-surgery was 1 in 28, and at 90 days post-surgery was 1 in 22. Serious adverse events were associated with increasing age, existing illness (comorbidity), and male sex: 1 in 9 women and 1 in 5 men aged 85 years and older experienced at least one serious adverse event within 90 days. While this is an observational study, the authors highlight the need to counsel all patients about the risk of serious adverse events.

Hoarseness had the highest individual PPV of 2.7%. Symptom combinations currently not included in NICE guidance were sore throat plus either dysphagia, dyspnoea, or otalgia, for which PPVs were >5%.

Comparing the effectiveness of three non-TNF α inhibitors for rheumatoid arthritis
Rituximab, abatacept, and tocilizumab are some of the more recently approved non-tumour necrosis factor (TNF) targeted biologic agents for the treatment of rheumatoid arthritis (RA) and a prospective cohort study in The BMJ set out to compare their effectiveness and safety. Using registry data, researchers included 3,162 eligible adults with RA treated with one of these agents. The primary outcome was drug retention without failure at 24 months. The results showed that, among adults with refractory rheumatoid arthritis followed-up in routine practice, rituximab and tocilizumab were associated with greater improvements in outcomes at two years compared with abatacept. In particular, findings revealed average durations of survival without failure were 19.8 months for rituximab, 19.1 months for tocilizumab, and 15.6 months for abatacept. The authors note that at month 24, the study drug was discontinued in about 30% of those using rituximab and tocilizumab and 60% of those using abatacept, “which emphasises the continued need for enlargement of the armamentarium of new biologic and targeted DMARDs in the treatment of rheumatoid arthritis”.

The treatment of symptomatic femoroacetabular impingement
Femoroacetabular impingement (FAI), a hip condition where adverse morphology predisposes to premature joint degeneration, is observed in about one fifth of the general population, although less than 25% of those affected develop pain. While physiotherapy and activity modification represent the principal treatment for symptomatic FAI, arthroscopic surgery is increasingly being adopted. A multicentre randomised controlled trial in The BMJ compared both interventions by randomly assigning 222 participants aged 18 to 60 years with symptomatic FAI to either hip surgery (n=112), or a programme of physiotherapy and activity modification (n=110). At eight months post randomisation, the mean hip outcome score activities of daily living subscale (HOS ADL) was 78.4 (95% CI 74.4 to 82.3) for the arthroscopic hip surgery group and 69.2 (65.2 to 73.3) for the physiotherapy programme group. After adjusting for baseline HOS ADL, age, sex, and study site, the mean HOS ADL was 10.0 points higher in the arthroscopic hip surgery group compared with the other. This suggests patients with symptomatic FAI referred to secondary or tertiary care achieve superior outcomes with arthroscopic hip surgery than with physiotherapy and activity modification.

Efficiency versus thoroughness in medication review
As the ageing population and increase in multimorbidity are driving the rise in polypharmacy, regular medication reviews are key to prevent it from becoming problematic. A qualitative interview study in UK primary care, published in the BJGP, explored the views of 13 GPs and 10 pharmacists on how these medication reviews are conducted. Although interviewees thought patients should be involved in decisions about their medicines, high workload pressures meant that most medication reviews were conducted with limited or no patient input. Pharmacists were perceived by both professions as being more thorough but less time efficient than GPs and few pharmacists were routinely involved in medication reviews. Medicines were rarely stopped or reduced, particularly as it was argued stopping medicines required involving the patient and this generated extra work. The study authors conclude that time and resource constraints are an important barrier to implementing NICE guidance which highlights the importance of involving patients in the medication review process.

Pharmacological treatments for generalised anxiety disorder
A systematic review and network meta-analysis in The Lancet set out to compare the pharmacological agents available for the treatment of generalised anxiety disorder, a disease that can be associated with substantial dysfunction. Out of 1,992 potential studies screened for inclusion, 89 trials, which included 25,441 patients randomly assigned to 22 different active drugs or placebo, were analysed. Duloxetine, pregabalin, venlafaxine, and escitalopram were more efficacious than placebo with relatively good acceptability. Mirtazapine, sertraline, fluoxetine, buspirone, and agomelatine were also found to be efficacious and well tolerated but these findings were limited by small sample sizes. Quetiapine had the largest effect on the Hamilton Anxiety Scale Score but it was poorly tolerated when compared with placebo. Likewise, paroxetine and benzodiazepines were effective but also poorly tolerated when compared with placebo. The results show there are several effective treatment choices for generalised anxiety disorder across classes of medication. And the authors point out that failure of initial pharmacological therapy might not be a reason to abandon a pharmacological treatment strategy.

Evidence that higher BMI leads to higher risk of psoriasis
While psoriasis is a common inflammatory skin disease that has been reported to be associated with obesity, the direction of causality has not yet been established. Researchers, writing in PLOS Medicine, used a mendelian randomisation (MR) approach, including 753,421 individuals, to investigate the link. They found that, overall, a 1 kg/m2 increase in BMI was associated with 4% higher odds of psoriasis (meta-analysis odds ratio [OR] = 1.04; 95% CI 1.03–1.04). MR analyses provided evidence that higher BMI causally increases the odds of psoriasis (by 9% per 1 unit increase in BMI; OR = 1.09 (1.06–1.12) per 1 kg/m2). In contrast, there was no evidence to support a causal effect of psoriasis genetic risk upon BMI. Although the authors acknowledge the study’s limitations, they say the findings support the prioritisation of therapies and lifestyle interventions aimed at controlling weight for the prevention or treatment of psoriasis and they call for further work to determine the effect of a short-term intervention aimed at reducing BMI upon psoriasis patients after disease onset.

Internet-delivered behaviour therapy for paediatric Tourette’s disorder
A pilot, single-blind, parallel group randomised controlled trial, in BMJ Open, evaluated the feasibility of adapting two existing behaviour therapy (BT) protocols for Tourette’s disorder (TD) and motor or vocal tic disorder (PTD) into a therapist-guided and parent-guided online self-help format. The study included 23 young people with TD/PTD, aged 8–16, who received one of two 10-week therapist-guided and parent-guided internet-delivered programmes. Patients and parents rated the interventions as highly acceptable, credible and satisfactory. While both interventions resulted in reduced tic-related impairment, parent-rated tic severity and improved quality of life, only the intervention where participants practised suppressing all tics at the same time resulted in a significant improvement on the Yale Global Tic Severity Scale measure. The therapeutic gains were maintained up to 12 months after the end of the treatment. The authors conclude internet-delivered BT has the potential to greatly increase access to evidence-based treatment for young people with TD/PTD and call for further evaluation of the efficacy and cost-effectiveness of this treatment modality.