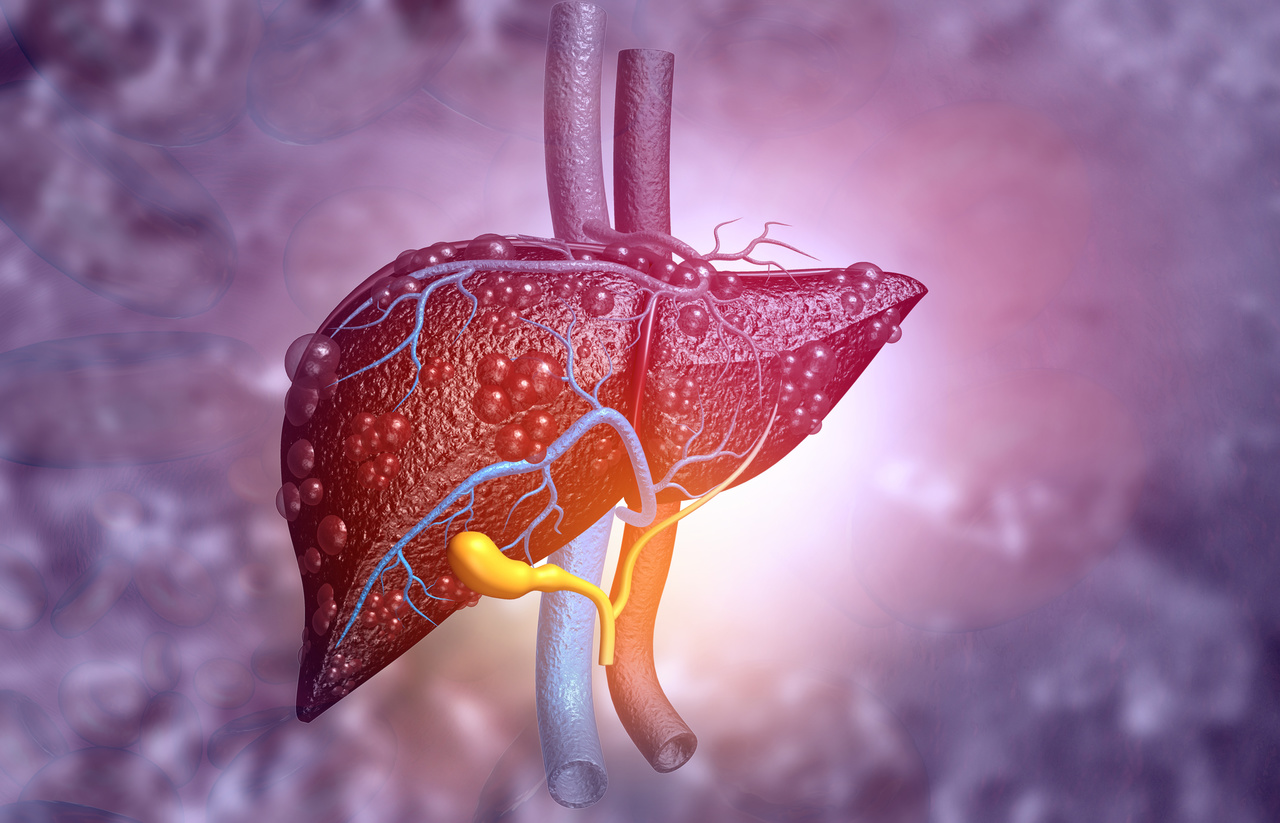 Copeptin is the stable surrogate marker of vasopressin (VP), which is released in response to elevated plasma osmolality or low blood pressure. Elevated plasma copeptin levels are associated with higher risk of insulin resistance-related disorders. Researchers, writing in BMC Medicine, explored the relationship between plasma copeptin and the presence/severity of non-alcoholic fatty liver disease and steatohepatitis (NAFLD/NASH). The study included 60 eligible obese patients. Circulating copeptin levels were also assessed in 60 age- and sex-comparable non-obese individuals without NAFLD. Obese patients with biopsy-proven NAFLD (53%) had significantly higher copeptin levels than both obese individuals without NAFLD and non-obese subjects (ob/NAFLD+ 9.5 ± 4.9; ob/NAFLD− 6.4 ± 2.6; and non-ob/NAFLD− 7.4 ± 5.1 pmol/L). Plasma copeptin concentration positively correlated with hepatic macro- and micro-vesicular steatosis, lobular inflammation and significantly increased throughout degrees of NASH severity, as expressed as absence, borderline, and overt NASH at the liver biopsy. Greater circulating copeptin predicted the presence of NASH with OR = 1.73 (95% CI = 1.02–2.93) after multivariate adjustment for age, sex, renal function and presence of type 2 diabetes and metabolic syndrome components. The authors conclude increased plasma copeptin is independently associated with the presence and severity of NAFLD and NASH, pointing to a novel mechanism behind human fatty liver disease potentially modifiable by pharmacological treatment and lifestyle intervention.

It is well known that obstructive sleep apnoea (OSA) is associated with higher risk of cardiovascular complications. A prospective cohort study in JAMA sought to determine the specific risk of cardiovascular complications after major non-cardiac surgery in patients with unrecognised OSA. The primary outcome was a composite of myocardial injury, cardiac death, heart failure, thromboembolism, atrial fibrillation, and stroke within 30 days of surgery. Among a total of 1,364 eligible patients recruited for the study, 1,218 (mean age: 67 years; 40.2% women) were included in the analyses. At 30 days after surgery, rates of the primary outcome were 30.1%, 22.1%, 19.0% and 14.2% for patients with severe, moderate, mild and no OSA, respectively. OSA was associated with higher risk for the primary outcome (adjusted HR: 1.49 [95% CI, 1.19-2.01]); but the association was significant only among patients with severe OSA (adjusted HR, 2.23 [95% CI, 1.49-3.34]). Findings showed no significant interaction effects on perioperative outcomes with type of anaesthesia, use of postoperative opioids, and supplemental oxygen therapy. The authors conclude that among at-risk adults undergoing major non-cardiac surgery, unrecognised severe OSA was significantly associated with increased risk of 30-day postoperative cardiovascular complications, and they call for further research to assess whether interventions can modify this risk.

A diagnostic accuracy study in the Annals of Internal Medicines has evaluated the performance of the T2Bacteria Panel – a direct-from-blood non-culture test that identifies the most common ESKAPE bacteria (Enterococcus faecium, Staphylococcus aureus, Klebsiella pneumoniae, Pseudomonas aeruginosa, and Escherichia coli) – in diagnosing suspected bloodstream infections (BSIs) in adults. The performance of T2Bacteria was compared with a single set of blood cultures in diagnosing proven, probable, and possible BSIs caused by T2Bacteria-targeted organisms in 1,427 patients for whom blood cultures were ordered as standard of care in 11 US hospitals. Blood culture and T2Bacteria results were positive for targeted bacteria in 3% and 13% of patients, respectively. Mean times from start of blood culture incubation to positivity and species identification were 38.5 and 71.7 hours, respectively. Mean times to species identification with T2Bacteria were 3.61 to 7.70 hours, depending on the number of samples tested. Per-patient sensitivity and specificity of T2Bacteria for proven BSIs were 90% (95% CI, 76% to 96%) and 90% (CI, 88% to 91%), respectively; the negative predictive value was 99.7%. The rate of negative blood cultures with a positive T2Bacteria result was 10%; 60% of such results were associated with probable or possible BSIs. If probable BSIs and both probable and possible BSIs were assumed to be true positives missed by blood culture, per-patient specificity of T2Bacteria was 94% and 96%, respectively. While the authors conclude the T2Bacteria Panel rapidly and accurately diagnoses BSIs caused by five common bacteria, they also acknowledge the study’s limitations which are the low prevalence of positive blood cultures, the collection of a single set of culture specimens, and the inability of T2Bacteria to detect non-targeted pathogens.

Pregnant women with epilepsy are at increased risk of death and complications from seizures, yet their high-risk status is often not recognised. Researchers writing in PLOS Medicine set out to develop and validate the prognostic EMPiRE model, using information collected during the antenatal booking visit, to predict seizure risk at any time in pregnancy and until six weeks postpartum in women with epilepsy on antiepileptic drugs. The model included age at first seizure, baseline seizure classification, history of mental health disorder or learning difficulty, occurrence of tonic-clonic and non-tonic-clonic seizures in the three months before pregnancy, previous admission to hospital for seizures during pregnancy, and baseline dose of lamotrigine and levetiracetam. The model discriminated well between those with and without seizures, with good agreement between predicted and observed risks across both low- and high-risk women. It also appeared clinically useful for decision-making where the threshold of choice for seizure risk is between 12% and 99%. The authors say the model can be used by healthcare professionals to identify pregnant women at high risk of seizures and to plan early referral for specialist input; determine the need for close monitoring in pregnancy, labour, and after childbirth; and assess antiepileptic drug management. They also point out that the performance of the model is unlikely to vary with the antiepileptic drug dose management strategy.

The World Health Organisation (WHO) International Classification of Diseases and Related Health Problems (ICD) is used globally by 194 WHO member nations. To test recommended changes in the Mental, Behavioural, and Neurodevelopmental Disorders chapter, multiple vignette-based case-controlled field studies have been conducted which examine clinicians’ ability to accurately and consistently use the new guidelines and assess their overall clinical utility. For the research, published in BMC Medicine, 2,288 mental health professionals were randomly assigned to apply either the ICD-11 or ICD-10 diagnostic guidelines for feeding and eating disorders (FEDs) to a pair of case vignettes designed to test specific clinical questions. Clinicians selected the diagnosis they thought was correct for each vignette, evaluated the presence of each essential feature of the selected diagnosis, and the clinical utility of the diagnostic guidelines. The proposed ICD-11 diagnostic guidelines significantly improved accuracy for all FEDs tested relative to ICD-10 and attained higher clinical utility ratings; similar results were obtained across all five languages the study was conducted in. The inclusion of binge eating disorder and avoidant-restrictive food intake disorder reduced the use of residual diagnoses. The authors conclude the proposed ICD-11 diagnostic guidelines consistently outperformed ICD-10 in distinguishing cases of eating disorders and showed global applicability and appropriate clinical utility. They say the proposed ICD-11 guidelines for FEDs could help increase accuracy of public health data, improve clinical diagnosis, and enhance health service organisation and provision.

The challenges of comorbidities in patients with cardiovascular disease
Low vision, diabetes mellitus and COPD among most prevalent conditions

Case report: amoebiasis - an underestimated STI
A diagnosis to consider in non-endemic areas in people who have never travelled abroad but have symptoms

Entamoeba histolytica is a cosmopolitan pathogenic parasite. It is spread via the faeco-oral route and, to a lesser extent, via sexual intercourse. An open access article in BMJ Case Reports describes a case of hepatic and intestinal amoebiasis in a 67-year-old man who had never travelled to an endemic area. Abdominal CT investigations detected two liver abscesses and chronic colitis. Positive amoebic serology and a positive PCR test for E. histolytica in the hepatic liquid and faeces confirmed the diagnosis. Curative metronidazole and tiliquinol-tilbroquinol were administered successfully. The patient had been contaminated through heterosexual intercourse with his healthy French female partner who was a carrier of the parasite. The authors say that, though unusual, amoebiasis as a result of sexual transmission should be considered in non-endemic areas in people who have never travelled abroad, particularly in the presence of clinical symptoms such as liver abscesses or chronic diarrhoea.