NICE: encorafenib with binimetinib recommended for unresectable or metastatic melanoma

Abemaciclib (Verzenios) with an aromatase inhibitor has been recommended in NICE final guidance, within its marketing authorisation, as an option for treating locally advanced or metastatic, hormone receptor-positive, human epidermal growth factor receptor 2 (HER2)-negative breast cancer as first endocrine-based therapy in adults. Abemaciclib is recommended only if the company provides it according to the commercial arrangement. Palbociclib or ribociclib, taken with an aromatase inhibitor, are usually the first treatments for locally advanced or metastatic, hormone receptor-positive, HER2-negative breast cancer. They are cyclin-dependent kinase 4 and 6 (CDK 4/6) inhibitors, as is abemaciclib. Clinical trial evidence shows that abemaciclib with an aromatase inhibitor increases how long people live without their disease getting worse, compared with an aromatase inhibitor alone. It is not known whether abemaciclib increases the length of time people live, because the final trial results are not available yet. Abemaciclib, palbociclib and ribociclib have different side effects, but they all appear to work as well as each other. The guidance says that, taking into account the commercial arrangements for all the CDK 4/6 inhibitors, abemaciclib is a cost-effective use of NHS resources and it can be recommended.

Further research should report details of patient selection, nodule size and position, and whether the nodule is cystic.

NICE has published final draft guidance which recommends ertugliflozin (Steglatro) as an option for treating type 2 diabetes in adults for whom metformin is contraindicated or not tolerated and when diet and exercise alone do not provide adequate glycaemic control, only if:

Ertugliflozin in a dual therapy regimen in combination with metformin is recommended as an option for treating type 2 diabetes, only if:

If patients and their clinicians consider ertugliflozin to be 1 of a range of suitable treatments including canagliflozin, dapagliflozin and empagliflozin, the least expensive should be chosen.

The final guidance is expected to be published on 27 March 2019.

NICE has published draft recommendations which find the current evidence on the safety and efficacy of valve-in-valve TAVI (ViV-TAVI) for aortic bioprosthetic dysfunction is adequate to support the use of this procedure provided that standard arrangements are in place for clinical governance, consent and audit:

NICE has published draft recommendations which find the evidence on the safety of reinforcement of a permanent stoma with mesh to prevent a parastomal hernia shows there are serious but well-recognised complications. The evidence on efficacy is limited in quantity and quality. Therefore, this procedure should not be used unless special arrangements are in place for clinical governance, consent, and audit or research. Closing date for comments is 21 March 2019.

NICE has published a quality standard which covers the experience of adults using social care services. It applies to all settings where people use social care services, including people's own homes, residential care and community settings. Its aim is to help people understand what care they can expect and to improve their experience by supporting them to make decisions about their care. It describes high-quality care in priority areas for improvement, such as:

The Medicines and Healthcare products Regulatory Agency (MHRA) has issued a medical device alert for Multi parameter patient monitors: Carescape B450, B650, B850, B20, B40, B20i, B40i, B125, B105, Dash 3000,4000,5000, Solar 8000M/i, 9500 due to risk of loss of patient monitoring. GE Healthcare has informed the MHRA that if networks are incorrectly configured with multiple monitors, a prolonged bandwidth overload condition may occur and cause monitors to restart. Actions required include:

The MHRA has issued a medical device alert due to potentially breached sterile packaging of: rectal tubes, Unoversal drainage systems, SimpaVac, sterile suction connecting tubes, sterile connecting pieces, suction handles/sets (FilterFlow™/Deltaflo), oxygen catheters, sterile nasal oxygen cannulas, sterile oxygen connecting tubes, and sterile forceps. ConvaTec Limited has informed the MHRA that the use of affected devices may increase the risk of patients acquiring infections. This is an extension of the list of devices affected from a previous alert issued in November 2018. Healthcare professionals are advised to:

The Royal College of Ophthalmologists has issued a safety alert after receiving a report from NHS Improvement of a severe adverse reaction in a six-month-old child with anisocoria who had been administered apraclonidine 1% to help exclude Horner syndrome. The College has published advice and recommendation, which include:

If considering the use of apraclonidine 0.5% for this purpose, all clinicians need to remember the drug is not licenced for children and its use is contraindicated according to the drug’s Summary of Product Characteristics. The College states that the decision to use apraclonidine needs careful weighing of the risks and benefits of the test, which should be discussed with patients/parents and documented in the records along with the fact that the drug’s use will be off license. The College recommends giving parents an information sheet or written documentation outlining possible side effects and clear instructions to attend an emergency department if there is abnormal drowsiness or concern the child is unwell. The use of apraclonidine drops in paediatric glaucoma is a separate issue and this advice does not pertain to that area, where there is a greater track record of safety and a greatly different risk-benefit balance.

The Pharmaceutical Services Negotiating Committee has warned that there are currently intermittent supply issues affecting Metoprolol 50mg and 100mg tablets due to the discontinuation of the product by some manufacturers and other manufacturers experiencing supply difficulties. Supplies of both strengths are available but stock may be limited and supply intermittent for a number of months. Suppliers of alternative beta-blockers have been contacted to determine if they can meet any additional demand and currently, the manufacturers of Carvedilol have indicated they would be unable to meet demand if patients were switched to this product. Manufacturers of Bisoprolol, Atenolol and Propranolol have indicated they have capacity to support any additional demand on their products.

The Royal College of Nursing has published a practice guidance on catheter care aiming to encourage widespread adoption of the National Occupational Standards across all NHS and independent health care sectors, by enabling a full understanding of the standards and providing quality care for patients.

Public Health England (PHE) has published mid-season data on the effectiveness of this year’s flu vaccines, alongside data from other countries, in Eurosurveillance (See OnMedica article). The data suggest that the nasal spray flu vaccine is 87% effective in children aged two to 17 years against the main circulating strain, influenza A(H1N1)pmd09. The vaccine given to adults aged 18 to 64 in at-risk groups is estimated to be 39% effective against the same strain. Influenza A(H1N1)pdm09 has been the main strain circulating this season. As the number of cases is lower, a precise estimate for those aged 65 and over will not be available until the end of the season. Vaccine uptake in children aged two and three is 43% and 45.2% respectively, and among school-aged children, this ranges from 56.2% to 63.9% depending on year group.

NHS England has announced plans to roll out enhanced physiotherapist service in GP practices to treat common aches and pains (see OnMedica article). Trials in 41 areas including Nottingham, West Cheshire and Gloucestershire have seen patients choosing to be assessed and treated for common musculoskeletal conditions by physiotherapists with enhanced skills based in GP practices, rather than waiting to see a GP to get a referral to hospital. Evaluation of the service found that in some areas they delivered hundreds of thousands of pounds of savings which the NHS can reinvest into patient care, while patient satisfaction with the care they received was very high. Patients will be able to book appointments directly with physios and other expert health professionals at a local practice, without the need to wait for a referral or travel to a specialist clinic. Initial findings from the pilots, supported by NHS England’s Elective Care Transformation Programme, show that faster treatment leads to faster recovery. Up to seven in 10 patients were successfully discharged after just one consultation, and one part of the country reduced the number of people requiring long-term physiotherapy care by a fifth. The service also helps people to manage their arthritis.

ADVICE LINE FOR NEW AND EXPECTANT MOTHERS ACROSS THE COUNTRY ANNOUNCED

NHS England has announced that new and expectant mothers across the country will be able to access immediate support through phone advice lines (see OnMedica article). Women can get advice on labour, breastfeeding, sleep and other health problems over the phone 24 hours a day, 365 days per year from the Surrey Heartlands Pregnancy Advice Line. Midwives direct people to the most appropriate place of care and provide midwifery advice for 999 operators and other healthcare professionals. The line also frees up midwives’ time to deliver more personal care onwards, by reducing the need for hospital visits and redirecting calls directly to a trained specialist.

CALL FOR FURTHER INVESTIGATION INTO THE “MISLEADING MARKETING” OF ‘HEALTHY’ FOODS

The Royal Society for Public Health (RSPH) has called for further investigation into the misleading marketing of foods labelled as ‘healthy’ following an investigation by BBC Radio 5 Live Investigates, which discovered three of the top five supermarkets have healthy eating sections which stock products that are unhealthy, scoring red on the traffic light system. Many of these products are vegetarian, vegan, or free from certain ingredients, but are highly processed, with high levels of fat, salt, or sugar. The EU register of Nutrition and Health Claims defines set values required for a product to be allowed to list health or nutrition statements. There is no definition for ‘healthy’, so currently supermarkets can market products under this term as they wish. There is a risk that promoting products as healthy could cause consumers to make purchasing decisions based on misrepresentative information. Trading Standards Officers have the power to inspect and enforce EU law, yet the evidence suggests the lack of a definition of what is ‘healthy’ allows supermarkets to use this to their advantage. RSPH is looking at this issue proactively, and is calling for:

ZOONOSES REPORT FINDS NO SLOWING DOWN OF ANTIMICROBIAL RESISTANCE

Data released by the European Centre for Disease Prevention and Control (ECDC) and European Food Safety Authority (EFSA) reveal that antimicrobials used to treat diseases that can be transmitted between animals and humans, such as campylobacteriosis and salmonellosis, are becoming less effective. According to the report, which refers to 2017 data, resistance to fluoroquinolones (such as ciprofloxacin) is so high in Campylobacter bacteria in some countries that these antimicrobials no longer work for the treatment of severe campylobacteriosis cases. Most countries reported that Salmonella in humans is increasingly resistant to fluoroquinolones. Multidrug resistance (resistance to three or more antimicrobials) is high in Salmonella found in humans (28.3%) and animals, particularly in S. Typhimurium. In Campylobacter, high to extremely high proportions of bacteria were found to be resistant to ciprofloxacin and tetracyclines. However, combined resistance to critically important antimicrobials was very low to low in Salmonella and Campylobacter from humans and animals and in indicator E. coli from animals.

OnMedica is an independent, easy to access on-the-go website for doctors. It provides GPs and specialists with easy to digest and up-to-date, relevant educational content whilst enabling the freedom to share and collaborate in a safe-space to further personal development.
Follow
3280 Contributions
76 Followers
1 Following 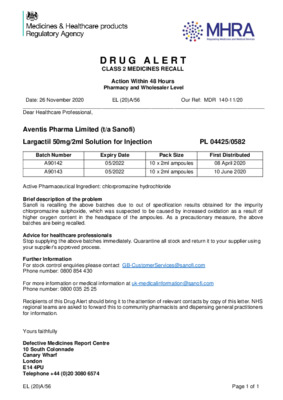 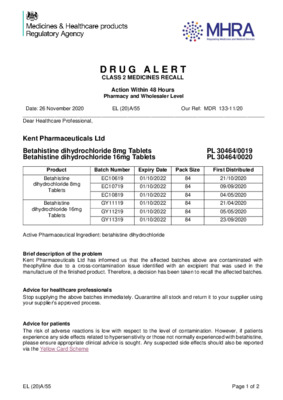 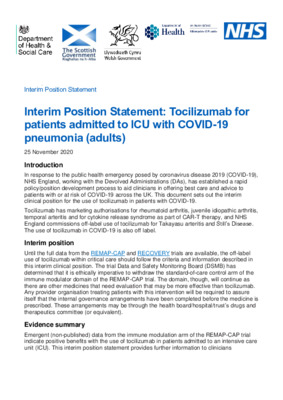