NICE has published final draft guidance which recommends patisiran (Onpattro), within its marketing authorisation, as an option for treating hereditary transthyretin amyloidosis in adults with stage 1 and stage 2 polyneuropathy. It is recommended only if the company provides patisiran according to the commercial arrangement. According to NICE committee, clinical trial evidence shows that patisiran reduces disability and improves quality of life, by enabling patients to return to work, carry out daily activities, participate in a more active family and social life; and maintain their independence and dignity. There is also evidence suggesting that patisiran may provide long-term benefits by stopping the progression of amyloidosis and potentially reversing it. Some assumptions in the economic modelling are uncertain, particularly around the utility values and the modelling of mortality. Also, the range of cost-effectiveness estimates presented is somewhat higher than what NICE usually considers acceptable for highly specialised technologies. However, taking additional factors into account, such as the uncaptured health-related benefits of stopping and potentially reversing the condition, the rarity and severity of the condition, the potential lifetime benefit for people with the condition and the innovative nature of the treatment, NICE recommended patisiran for use in the NHS.

NICE has published a quality standard which covers the diagnosis and management of Lyme disease in people of all ages. It also includes raising public awareness about prevention. It comprises four Quality Statements describing high-quality care in priority areas for improvement::

NICE has published a quality standard which covers the assessment and management of hearing loss in adults (aged 18 and over). It includes people presenting with hearing loss for the first time in adulthood whether it started in adulthood or earlier. It comprises six Quality Statements describing high-quality care in priority areas for improvement:

Following a resubmission, the Scottish Medicines Consortium (SMC) has accepted arsenic trioxide (Trisenox®) for use within NHS Scotland, in combination with all-trans-retinoic acid (ATRA [tretinoin]) for the induction of remission, and consolidation in adult patients with newly diagnosed, low-to-intermediate risk acute promyelocytic leukaemia (APL) (white blood cell count ≤10 x 103/µl), characterised by the presence of the t(15;17) translocation and/or the presence of the Pro Myelocytic Leukaemia/Retinoic-Acid-Receptor-alpha (PML/RAR-alpha) gene. In a Phase III study in patients with newly diagnosed, low-to-intermediate risk APL, arsenic trioxide was non-inferior to anthracycline-based chemotherapy (both in combination with tretinoin) measured by event-free survival. A significant difference in overall survival favouring arsenic trioxide was also demonstrated.

Following a full submission considered under the end of life and orphan equivalent assessment process, the SMC has accepted palbociclib (Ibrance®) for use within NHS Scotland, under a Patient Access Scheme (PAS), for the treatment of hormone receptor (HR)-positive, human epidermal growth factor receptor 2 (HER2)-negative locally advanced or metastatic breast cancer:

DARVADSTROCEL NOT RECOMMENDED FOR THE TREATMENT OF COMPLEX PERIANAL FISTULAS

Following a full submission assessed under the orphan medicine process, the SMC has not recommended darvadstrocel (Alofisel®) for use within NHS Scotland, for the treatment of complex perianal fistulas in adult patients with non-active / mildly active luminal Crohn’s disease, when fistulas have shown an inadequate response to at least one conventional or biologic therapy. In a randomised, double-blind, phase III study, the rate of combined remission at week 24 was significantly higher with darvadstrocel than placebo in patients with Crohn’s disease and complex perianal fistulas. However, the submitting company did not present a sufficiently robust economic analysis to gain acceptance by the SMC.

ENCORAFENIB NOT RECOMMENDED FOR MELANOMA WITH A BRAF V600 MUTATION

Following a full submission assessed under the end of life and orphan medicine process, the SMC has not recommended encorafenib (Braftovi®) for use within NHS Scotland, in combination with binimetinib for the treatment of adult patients with unresectable or metastatic melanoma with a BRAF V600 mutation. Progression-free survival was significantly longer in the encorafenib plus binimetinib group compared with BRAF inhibitor monotherapy in a phase III study of patients with unresectable or metastatic BRAF V600 melanoma. However, the submitting company did not present a sufficiently robust economic analysis to gain acceptance by the SMC.

The Royal College of Ophthalmologist (RCOphth) has issued a safety alert about particulate matter that has been discovered in syringes for intravitreal injections. The literature reports that silicone oil droplets have been implicated in the past but the RCOphth has stated that this set of cases appears to be linked to particles of syringe plastic material. There are also concerns of a small number of cases of sterile endophthalmitis in the same unit and whether this could be in any way linked to the particles seen but there is so far no evidence of such a causative link. The RCOphth recommends that a visual inspection of the syringe and contents is undertaken prior to any intravitreal injection and that, if there is a suspicion of contamination or particulate matter, the device is quarantined and returned to the manufacturer for investigation. In addition, clinicians should document any issues via local governance routes and alert the Medicines and Healthcare products Regulatory Agency where appropriate.

DRUG ALERT ISSUED FOR EMERADE 150, 300 AND 500 MICROGRAM SOLUTION FOR INJECTION IN PRE-FILLED SYRINGE

The Medicines and Healthcare products Regulatory Agency (MHRA) has issued a class 4 medicines defect alert for Emerade 150, 300 and 500 microgram solution for injection in pre-filled syringe (MDR 55-06/18). Bausch & Lomb UK limited has informed the MHRA of a risk of Emerade product failing to deliver a dose of adrenaline from the syringe due to blockage of the needle. This issue was first detected in June 2018 during routine stability testing of the syringe component of Emerade, with potential to affect 1.5 in every ten thousand pens, and therefore considered a rare event. However, recent information indicates that the potential occurrence of needle blockage in batches on the market is higher than first estimated. The potential for units on the market to have a blockage of the needle which could lead to Emerade failing to deliver a dose when activated is now estimated to be 0.23 %, which would affect 2.3 in every thousand pens. (This estimate is based on simulated laboratory conditions without the auto-injector component which may lower the potential rate of failure to deliver. However, if the patient follows the existing advice to carry two in-date pens with them at all times, the risk of not being able to deliver a dose of adrenaline before the emergency services arrive is substantially reduced (from 0.23% to 0.000529%). This notification of potential for needle blockage applies to Emerade devices of all strengths. It does not apply to the other marketed brands of adrenaline auto-injectors. Healthcare Professionals should contact all patients, and their carers, who have been supplied with an Emerade device to inform them of the potential defect and reinforce the advice to always carry two in-date adrenaline autoinjectors with them at all times.

The Medicines and Healthcare products Regulatory Agency has issued a class 4 medicines defect information alert for Phenobarbital Sodium 30mg/ml Injection (MDR 48-02/19). Martindale Pharma has informed the MHRA that the EAN bar code for certain batches is incorrect. The barcode error increases the risk of product mix up when an automated inventory system is used to dispense the affected batch within the pharmacy or wholesale facility. Pharmacists are advised that the barcode should not be used for any dispensing activities and to bring this notice to the attention of all relevant staff within the facility.

The Pharmaceutical Services Negotiating Committee has published further information regarding a previous shortage announcement for Disopyramide 100mg and 150mg capsules. Sanofi, the manufacturer of Rythmodan (Disopyramide) 100mg Capsules, has released a letter for healthcare professionals announcing that due to manufacturing issues Rythmodan (Disopyramide) 100mg Capsules will be out of stock until September 2019. To cover this period Sanofi has made arrangements to import unlicensed Italian stock of Ritmodan 100mg Capsules. Details can be found in the letter including a link for a UK-approved patient information leaflet.

The Department of Health and Social Care has issued a supply disruption alert for Marcain Heavy 0.5% Solution for Injection. The DHSC notes that the solution for injection will be out of stock until 22nd July. The DHSC has put together a management plan, which has been developed in collaboration with NHS England, the Royal College of Anaesthetists and the Association of Anaesthetists. DHSC states that further work is ongoing with these organisations to consider implications of this supply issue and guidance advising about further alternative options will be shared through clinical networks if necessary. Other bupivacaine injectable preparations continue to remain available during this time.

In 2013 the Royal College of Nursing (RCN) published its Position Statement on Termination of Pregnancy (Induced Abortion) (RCN 2013), and a part of that publication was providing guidance for nurses and midwives who wish to exercise the legal right to conscientious objection. New guidance has reviewed RCN advice and updated the document for ease of use by nurses, midwives and nursing associates on the issue of conscientious objection.

The Royal College of Physicians has published joint guidance with the Royal College of Pathologists and British Society for Genetic Medicine which aims to help healthcare professionals through the complex ethical issues that arise in genomic medicine (see OnMedica article). The guidance was prepared by the Joint Committee on Genomics in Medicine, which includes representatives from all three organisations. Consent and confidentiality in genomic medicine is an update of previously published advice. It covers a wide variety of situations that all healthcare professionals dealing with genetic and genomic information will face, as testing becomes more prevalent across the whole of medicine. The new edition includes real-life examples of ethical issues, and stresses how much these cases relate to the family situation of the person being tested or treated. While providing general advice, the guidance is clear that each case should be addressed individually. The report also covers the use of genomic data for research, commercial and insurance purposes, and issues relating to keeping in touch with patients and relatives during their lifetime.

DECISION TO GIVE BOYS HPV VACCINATION GETS GO AHEAD

Public Health England has announced that from this September year eight school boys will be offered the free Human Papilloma Virus (HPV) vaccine (see OnMedica article). Modelling produced by the University of Warwick estimates that by 2058 in the UK the HPV vaccine currently being used may have prevented up to 64,138 HPV-related cervical cancers and 49,649 other HPV-related cancers. This would be 50 years after the introduction of the HPV vaccination programme, when people who were vaccinated as teenagers have reached the age groups that they would typically be affected by HPV-related cancers. Parents of girls and boys aged 12 and 13 should look out for information from their children’s school about the vaccine and timings for the jab. If they miss out on the vaccination for any reason they should talk to their school nurse or immunisation team about getting the vaccine at a later date.

OnMedica provides high-quality, easy to digest content and CPD for UK-based GPs and clinicians. Our team of expert editors and clinicians develops content across a wide range of topics in a variety of formats—expert articles, bitesize news and quizzes, courses, videos, and more. You can explore OnMedica via the homepage, drop down menu or by typing your topic of choice in the search bar. Why not find out how OnMedica can help you to keep up to date quickly and easily?
Follow
3651 Contributions
193 Followers
1 Following

The MHRA has issued a notification to inform of revisions to the COVID-19 Vaccine AstraZeneca product information for healthcare professionals. 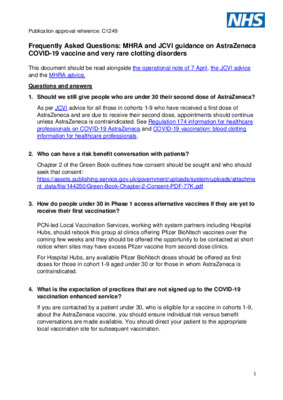 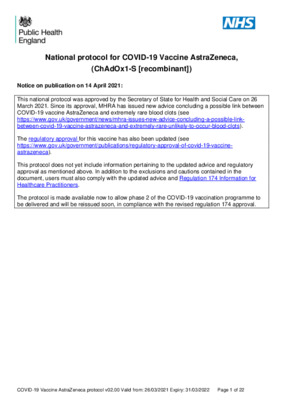 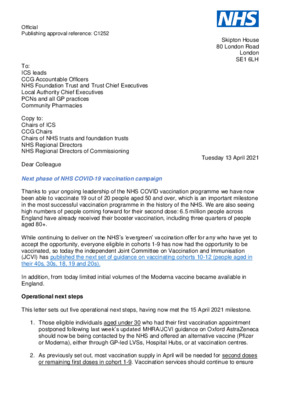