Ribociclib with fulvestrant recommended for advanced breast cancer through CDF

RIBOCICLIB WITH FULVESTRANT RECOMMENDED FOR ADVANCED BREAST CANCER THROUGH CDF

NICE has published final technology appraisal guidance which recommends ribociclib (Kisqali) with fulvestrant for use within the Cancer Drugs Fund (CDF) as an option for treating hormone receptor-positive, human epidermal growth factor receptor 2 (HER2)-negative, locally advanced or metastatic breast cancer in people who have had previous endocrine therapy only if:

During technical engagement it was agreed that the appraisal would focus on people whose disease has progressed up to 12 months after neoadjuvant or adjuvant endocrine therapy or after one line of endocrine therapy for advanced disease. The main alternative for this population is exemestane with everolimus. NICE says clinical trial evidence suggests that, compared with fulvestrant alone, ribociclib with fulvestrant increases the length of time before the disease progresses in people who have had previous endocrine treatment. It is not known however whether ribociclib increases the length of time people live because the final trial results are not available yet. NICE adds that the results of an indirect comparison of ribociclib and fulvestrant with exemestane and everolimus are very uncertain. The cost-effectiveness estimates are also very uncertain and are above the range NICE normally considers an acceptable use of NHS resources. However, NICE considers that ribociclib with fulvestrant has the potential to be cost effective for the population considered in the appraisal, which is why it is recommended through the CDF while more data are collected to resolve the uncertainties in the clinical evidence.

NICE has published final guidance which recommends dacomitinib (Vizimpro), within its marketing authorisation, as an option for untreated locally advanced or metastatic epidermal growth factor receptor (EGFR) mutation-positive non-small-cell lung cancer (NSCLC) in adults. It is recommended only if the company provides it according to the commercial arrangement. Locally advanced or metastatic EGFR mutation-positive NSCLC is usually first treated with afatinib, erlotinib or gefitinib. NICE says evidence from a randomised controlled trial shows that people who take dacomitinib live longer than people who take gefitinib. They also live longer before their disease gets worse. An indirect comparison suggests there is no difference between dacomitinib and afatinib in terms of how long people live or how long it is before their disease gets worse. However, NICE notes there is some uncertainty about the assumptions used in the cost-effectiveness modelling, but concludes the most plausible cost-effectiveness estimate is within what NICE normally considers an acceptable use of NHS resources.

NICE has published final guidance which recommends patisiran (Onpattro), within its marketing authorisation, as an option for treating hereditary transthyretin amyloidosis in adults with stage 1 and stage 2 polyneuropathy. It is recommended only if the company provides patisiran according to the commercial arrangement. At the time of the evaluation, there were no disease-modifying treatments in widespread use. NICE says that clinical trial evidence shows that patisiran reduces disability and improves quality of life, by enabling patients to return to work, carry out daily activities, participate in a more active family and social life, and maintain their independence and dignity. There is also evidence suggesting that patisiran may provide long-term benefits by stopping the progression of amyloidosis and potentially reversing it. However, NICE says some assumptions in the economic modelling are uncertain, particularly around the utility values and the modelling of mortality. Also, the range of cost-effectiveness estimates presented is somewhat higher than what NICE usually considers acceptable for highly specialised technologies. However, after taking additional factors into account, such as the uncaptured health-related benefits of stopping and potentially reversing the condition, the rarity and severity of the condition, the potential lifetime benefit for people with the condition and the innovative nature of the treatment, NICE recommended partisan for use in the NHS.

NICE and Public Health England (PHE) have issued draft antimicrobial prescribing guidance on impetigo. Although impetigo usually clears up within two to three weeks without treatment, it is normally treated with an antibiotic to help reduce the spread of infection and speed up recovery. However, NICE and PHE found that a topical antiseptic such as hydrogen peroxide 1% cream is just as effective at treating non‑bullous impetigo as a topical antibiotic. NICE now says that topical antiseptics should be offered to people with localised, non-bullous impetigo if they are not systemically unwell or at risk of developing any complications. If antiseptic treatment is not suitable, or a person has widespread non-bullous impetigo, a topical antibiotic should be given instead (fusidic acid 2%). An oral antibiotic (flucloxacillin) is also an option for people with widespread non-bullous impetigo and should be given first line if the person has bullous impetigo or if they are systemically unwell or at risk of developing any complications. The guidance also now states that combination treatment with a topical and oral antibiotic should not be used to treat impetigo. It suggests using both oral and topical treatments is no more effective than using a single topical treatment alone. Final guidance is expected 14 February 2020.

NICE has published final guidance which finds that current evidence on the safety and efficacy of endovascular insertion of an intrasaccular wire-mesh blood-flow disruption device for intracranial aneurysms is adequate to support the use of this procedure provided that standard arrangements are in place for clinical governance, consent and audit. NICE says the patient selection should be done by a multidisciplinary team, except in emergency situations, when this may be replaced by a discussion between an interventional neuroradiologist and neurosurgeon. The procedure should only be done in specialised centres with expertise in the use of this technology and access to neurosurgical facilities.

NICE has published final guidance which finds the current evidence on the safety and efficacy of low-energy contact X‑ray brachytherapy (the Papillon technique) for locally advanced rectal cancer is inadequate in quantity and quality. Therefore, NICE recommends this procedure should only be used in the context of research, and that further research should include randomised controlled trials comparing this procedure with standard care and report details of patient selection (including tumour type and suitability for surgery), patient-reported outcomes, quality of life and long-term outcomes.

GUIDELINE ON ALCOHOL INTERVENTIONS IN SECONDARY AND FURTHER EDUCATION

NICE has published a guideline which covers interventions in secondary and further education to prevent and reduce alcohol use among children and young people aged 11 up to and including 18. It also covers people aged 11 to 25 with special educational needs or disabilities in full-time education. It is also relevant to children aged 11 in year six of primary school. The guideline includes recommendations on:

Following an abbreviated submission, the Scottish Medicines Consortium (SMC), has accepted Glyxambi® (empagliflozin/linagliptin) for restricted use within NHS Scotland, for the treatment of type 2 diabetes mellitus in adults aged 18 years and older:

It is restricted to use in line with the previous SMC advice on empagliflozin and linagliptin. In patients for whom this combination is appropriate, Glyxambi® offers a single tablet at a lower cost per dose compared with the individual components.

Following a full submission, the SMC has accepted Ilumetri® (tildrakizumab) for restricted use within NHS Scotland, under a Patient Access Scheme (PAS), for the treatment of adults with moderate to severe plaque psoriasis who are candidates for systemic therapy. The medicine is restricted for use in patients who have failed to respond to conventional systemic therapies (including ciclosporin, methotrexate and phototherapy), are intolerant to, or have a contraindication to these treatments. The SMC finds Ilumetri® was superior to placebo in improving the signs and symptoms of psoriasis in adults with moderate to severe plaque psoriasis, who were candidates for systemic therapy.

The SMC has accepted Buvidal® (buprenorphine) for restricted use within NHS Scotland, for the treatment of opioid dependence within a framework of medical, social and psychological treatment. Treatment is intended for use in adults and adolescents aged 16 years or over. This medicine is restricted to use in patients in whom methadone is not suitable and for whom the use of buprenorphine is considered appropriate. In a phase III study in patients with opioid dependence, subcutaneous buprenorphine was non-inferior to sublingual buprenorphine/naloxone for the mean percentage of urine samples with test results negative for illicit opioids.

Following a full submission considered under the orphan equivalent process, the SMC has accepted Venclyxto® (venetoclax) for use within NHS Scotland, under a PAS, in combination with rituximab for the treatment of adult patients with chronic lymphocytic leukaemia (CLL) who have received at least one prior therapy. The SMC notes that progression-free survival was significantly longer in the venetoclax plus rituximab group compared with chemoimmunotherapy in a phase III study of patients with relapsed or refractory CLL.

The SMC has accepted Tegsedi® (inotersen) for use within NHS Scotland, under a PAS, for the treatment of stage 1 or stage 2 polyneuropathy in adult patients with hereditary transthyretin amyloidosis (hATTR). In a phase II/III study of adults with hATTR and polyneuropathy, Tegsedi® was associated with significantly less worsening compared with placebo, measured by the change in modified neuropathy impairment score +7 (mNIS+7) and in Norfolk Quality of Life-Diabetic Neuropathy (QOL-DN) questionnaire from baseline to 66 weeks.

SIX MEDICINES NOT ACCEPTED FOR USE WITHIN NHS SCOTLAND

The following medicines have not been accepted by the SMC for use within NHS Scotland as the clinical and economic analysis presented by the submitting companies was not deemed sufficiently robust:

The following medicines have not been accepted by the SMC for use within NHS Scotland as the marketing authorisation holders have not made a submission to SMC:

The Dispensing Doctors’ Association (DDA) has reported that in response to HRT shortages, the British Menopause Society (BMS) has produced an update on the current availability of HRT products. The BMS advises that, during these temporary shortages, prescribers can consider equivalent preparations that provide a similar dose to what their patient is using. If an exact match is not possible, prescribers can seek guidance available on the practical prescribing chart on the BMS website and Menopause Matters website, to clarify equivalent doses.

The DDA has identified 19 new shortage issues from the Department Health’s supply issues update for August:

DDA members can view the update in the shortages section of the DDA website.

NHS England has announced that more people who are at risk of type 2 diabetes will receive digital support to prevent them developing the condition as part of the NHS Long Term Plan (see OnMedica article). In pilot schemes, offering convenient, 24/7 access to online advice significantly boosted the numbers taking up the flagship Diabetes Prevention Programme (DPP), NHS England found. Almost seven in 10 people referred to digital schemes took part compared with around half of those offered face-to-face support. Up to a fifth of places on NHS England’s flagship DPP will be delivered digitally. People who are at risk of developing type 2 but who cannot make face-to-face support sessions will be benefit from the expansion which starts this month. NHS England says patients will receive:

OnMedica provides high-quality, easy to digest content and CPD for UK-based GPs and clinicians. Our team of expert editors and clinicians develops content across a wide range of topics in a variety of formats—expert articles, bitesize news and quizzes, courses, videos, and more. You can explore OnMedica via the homepage, drop down menu or by typing your topic of choice in the search bar. Why not find out how OnMedica can help you to keep up to date quickly and easily?
Follow
3538 Contributions
161 Followers
1 Following

NICE does not recommend treatment for metastatic prostate cancer 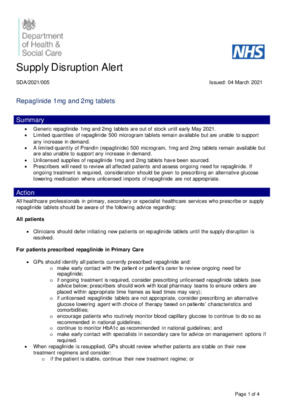 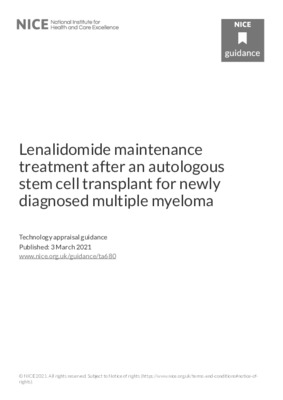